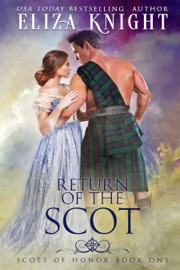 Return of the Scot

Highland war heroes rebuilding their lives grapple with ladies forging their own paths—who will win?

Scarred by the brutal ravages of war, Lorne Gordon, Duke of Sutherland, returns to the Highlands to discover that his clan thought him long dead. His greedy half-brother has assumed his title, sold his family seat and disappeared with the fortune. Once he engineers the return of his title, he must convince the new estate owner to reverse the wholly legal sale with the promise that his half-brother, and the funds, will be found. However, that goal seems impossible when Lorne discovers the buyer is none other than his ex-betrothed’s sister.

After several humiliating attempts at securing a husband, Jaime Andrewson gives up on marriage and throws herself into her father’s business. She burns with vengeance towards the entire Sutherland family after their chieftain caused her sister’s fall from grace. Although she’d thought the man who betrayed her sister was dead, acquiring his property had been her main goal since taking over her father’s company. But with Lorne Gordon alive, vengeance is all the sweeter, for she desires only to watch him suffer.

Despite Lorne’s fury, he has to find a way to convince her to return what is rightfully his—even if he has to go so far as to marry her. Though out of practice with the arts of flirtation, there is one thing he does not lack—determination. With his pockets empty and a snarl on his lips, Lorne is determined to win her trust and her hand. When unexpected family secrets on both sides are exposed, Lorne realizes that wooing Jaime will be a bigger challenge than any of the other battles he’s ever fought, but it is one he refuses to lose.