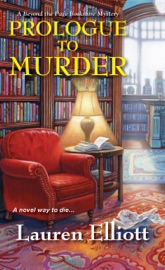 After a career working with rare books at the Boston Public Library, Addie Greyborne is back in her seaside New England hometown—where unfortunately, murder is not so rare . . .

Gossip columnists love a bold-faced name—but “Miss Newsy” at Greyborne Harbor’s local paper seems to specialize in bald-faced lies. She’s pointed a finger of suspicion at Addie after librarian June Winslow never makes it home from a book club meeting. And when June’s found at the bottom of a steep flight of stairs, Addie’s not only dealing with a busybody, but a dead body.

It’s a good thing the guy she’s dating is the police chief. But both the case and her love life get more complicated when a lanky blonde reporter from Los Angeles shows up. She’s trying her hardest to drive a wedge between the couple . . . as if Addie doesn’t have enough problems dealing with angry townspeople. Despite all the rumors, Addie doesn’t know a thing about the murder—but she plans to find out. And the key may lie in a book about pirate legends that June published. Now she just has to hunt down the clues before she becomes a buried treasure herself . . .